MUSINGS ON THE CASEY ANTHONY VERDICT 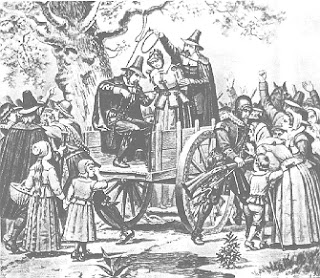 Bridget Bishop was the first to be hung in Salem for witchcraft.  She was a twice-widowed tavern owner, owning "an ordinary" on the road between Salem and Beverly. She served a new and powerful drink called "rum" to many of the sailors who frequented her place. The sailors also played an evil new game called "shuffleboard that upset many of the neighbors. Bridget wore bright clothes, a major offense in the eyes of the Puritans of Salem.


A great public outcry has erupted in the United States about the not-guilty verdict in Florida.  Almost everybody seems to have an opinion on Anthony’s guilt or innocence, and most are not afraid to express them.


I want to say up front that I am not about to advocate for either the innocence or the guilt of Casey Anthony.

Once again, we have millions of people making a personal determination on guilt or innocence dependent solely on what they heard in the press.  Of these millions of people, maybe dozens were ever in the courtroom for a single day.  While Americans were dying in Iraq and Afghanistan, while Jason Puracal, an innocent American was being held captive on trumped-up murder charges in Nicaragua, while the extent and tactics of the railroading of Amanda Knox in Italy was being exposed to the rest of the world, a great mass of the American press was focused on one case in one (obviously gut-wrenching) murder trial.  This was not any great search for justice, any great quest to honor the memory of a poor, murdered girl; this was a quest for ratings; and with ratings, for career; and with career; fame and money.
(I say this with some trepidation, because I have in the past appeared on these same shows.  And likely will not be asked again after this post).
With the motivations enumerated above, what would advance the interests of this segment of the media?  Facts that supported Anthony’s innocence? Or sensational facts that cause more buzz?  I would postulate that anything that would work against or disprove the perceived (and reported) wanton, cold, sociopathic killing of an adorable child would tend to calm the anger and the blood-thirst of an angry population, which would hurt ratings.  It is the very anger and desire for retribution of much of the populace that causes them to watch these types of shows. This is the modern equivalent of the mob which chased the Frankenstein monster with pitch forks and torches. These are not all the viewers, but they are certainly some.
Therefore, the media has a vested interested in broadcasting salacious details of these types of cases, and a disincentive for broadcasting or exposing exculpatory information.  These news shows are not the New York Times, either.  They are shows that appeal to a different audience and are in the running for Pulitzer Prizes much the same way Animal House was in the running for an Oscar.  I have a built-in distrust of these types of shows.  I’ve seen it from the inside.
I am not saying that Casey Anthony is in reality innocent of the charges.  I am not saying that she is guilty, either.  I am saying that I haven’t seen the evidence, and until I do, I will have to trust the jury, the court and the justice system for the verdict.

Too often, there is a tendency to "follow the crowd" and make a determination of guilt or innocence based simply on what appears in tabloids, or the rumors one has heard.  This is why Amanda Knox is in prison. I am disturbed by people decrying the Anthony verdict who I know for sure know nothing about the case.  I do not want to ever make a public statement on a person's guilt or innocence until I have done my "due diligence."  I was involved in the investigation of at least one FBI Agent involved shooting.  Several law enforcement officers were at the scene of a short but vicious gun-battle.  The only one who did not shoot was the FBI Agent.  I asked several of the agents from other agencies why they shot.  Two said, "My partner shot at the guy, so I shot, too."  So I asked, "But what was the suspect doing that was dangerous? Did he have a gun? Was he shooting? What?"  The answer was disturbing; "I didn't see what he was doing, I was backing up my partner."  The agent I spoke to, I am relieved to say, said; "I didn't know why everybody was shooting. I didn't see the threat."  Sending bullets 'down-range' without knowing what's going on can kill an innocent person based on the repeated, un-examined mistake of the one officer.

I have yet to hear of a person who really understands the evidence in the Amanda Knox case say that they believe she is guilty.  Yet, during the first trial, there was no shortage of uninformed people willing to say Amanda was guilty; people who knew little or nothing about the real evidence.  I am not saying that only those who sat through the case in its entirety or had access to the raw evidence can make an informed decision.  The more evidence you have, the more informed a decision one can make. But most people were making pronouncements without any functional knowledge at all.  I actually heard someone say, "That American girl?  What's her name?  Oh, she's a witch."  She didn't even know her name.  Yet she claimed to know enough to condemn her.  Some have seen the available evidence in the Anthony case in the legitimate press and have made more informed decisions.  In the Amanda Knox case, I did the same thing.  And once I saw the actual evidence, I changed my mind about believing the jury:  Amanda Knox was framed.  I learned that I cannot always trust every jury and every justice system.  I have no idea whether Casey Anthony killed her daughter.  But it is somewhat moot, as Casey is not in prison.
FAILURE MODES
In the U.S., defendants are considered innocent until proven guilty.

There is a term in aviation called the "failure mode."  It is what happens to a particular piece of the airplane when that piece fails.  For instance, when traffic lights fail; rather than displaying green on all sides, which would be disastrous, they fail to a flashing red. When aircraft hydraulics fail, the landing gear generally falls down. When electronic engine controls fail, the engine generally goes to 3/4 power, not idle, which means you can get to an airport. It is all aimed at insuring that if something goes terribly wrong, that the best result possible happens. An example of a bad failure mode is the DC-10.  As United Airlines found out over Sioux City, Iowa, when you lose hydraulic pressure in a DC-10, the airplane is no longer controllable. 184 of 296 people died, because the failure mode was not considered.


U.S. courts do not always default to the "innocent" position when they fail.  But they are supposed to.  So when I see a very controversial verdict and realize that the decision was made in favor of innocence, I at least have the comfort in knowing that the failure was, if it was a failure, in the right direction.

In the U.S., when the justice system fails, it fails to the "innocent" mode.  I'm glad it does. If it failed to the guilty mode, anybody who could not prove their innocence would go to jail or be executed. I almost threw a hammer through the TV when O.J. Simpson, who I believed (and still believe) killed two people, was acquitted.  But compared to Amanda Knox doing (so far) four years in an Italian prison for a murder she did not commit, that anger and frustration was inconsequential. The “failure to innocence” is a standard from Biblical times.  These are some of my favorite examples of the depth and breadth of the standard of “innocent until proven guilty,” and the greater need to protect the innocent than to punish the guilty.

On 3 October 1692, while decrying the Salem witch trials, Increase Mather wrote, "It were better that Ten Suspected Witches should escape, than that the Innocent Person should be Condemned."

Benjamin Franklin wrote: "It is better [one hundred] guilty Persons should escape than that one innocent Person should suffer," or even better;

And finally: Abraham and God when God said he was going to destroy Sodom;

The LORD said, “If I find fifty righteous people in the city of Sodom, I will spare the whole place for their sake.”
Abraham bargained him down through several levels until God finally agreed to spare an entire city if it would have cost the punishment of ten innocent persons.

Abraham asked; “What if only ten can be found there?”

[God] answered, “For the sake of ten, I will not destroy it.”
Is Casey Anthony innocent?  I believe that the prosecution was not able to prove her guilt.  If she was guilty, then that was their burden and they failed to meet it.
If the justice system failed, it failed in the safest mode.
Posted by Steve Moore at 1:47 PM