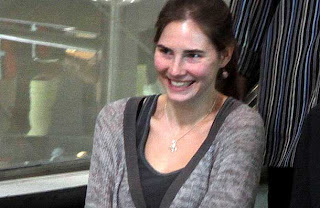 
What remains is to ensure that this does not happen again. As Egan said, “Perhaps the tide from Perugia will lift other boats.” For this to happen, though, pompous prosecutor Giuliano Mignini, forensic perjurer Patrizia Stefanoni, and mind-reading detective Edgardo Giobbi (and others), must be prosecuted for their corruption. The judge who rubber-stamped the lies in the first trial, Massei, must also be called to the bar of justice—or back to law school. That is what will occupy some of my time for the next few years, I’m sure. But for right now, I am in the mood to bathe in the warmth of the freedom of Amanda Knox. The sunshine of the justice she obtained should warm the entire world.
At this moment, I find that the word “elation” is woefully inadequate to describe my emotions.  Euphoria might be a closer word, but euphoria eventually fades. As long as I live, I will remember that late night in the courtroom when two innocents were rescued from a cabal of evil men.
Posted by Steve Moore at 12:30 PM