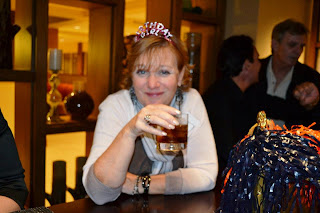 
But by 4:15, the realization was hitting most of us that we could only hold on to the moment so long, and like Peter Pan and the Lost Boys, we had to grow up and get on with life. We reluctantly hugged, kissed, shook hands and promised to keep in touch and went off in different directions to our rooms. The next day, we continued in different directions at 500 miles per hour. I felt true sadness that the moment ended, not sadness at what time had done to all of us. Because frankly, time had been a friend. No, we hadn’t recaptured our youth, we hadn’t “gone home,” nor were we reliving our high school 'glory days.' Maybe we realized that we would never want to recapture our youth.
On the way back to my hotel, my thoughts went to the conversations we had traded that night and I realized that no one hid behind the mask of “the perfect life.” Everyone at one time or another spoke of hidden pain, hardships and loss. Not one person wallowed in them, but neither were they afraid to admit them, to share their challenges and the ways they got through them, not because they wanted sympathy, but so they could encourage others. It was if they instinctively knew that everybody our age had been through hell at least once, and if you were on top one moment, you might be in a valley the next. It wasn’t a major topic, but it was there, and it was refreshing, and it was encouraging to see how people had overcome.

IT'S THE FIRE THAT MAKES THE DIFFERENCE 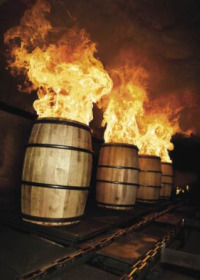 And as I drove, my mind went to Glenglassaugh. Not because I needed another drink.  I was reminded of two little-known requirements for the making of fine Scotch. Fire and Bourbon. The best Scotch brands are aged in American Bourbon barrels that have had the interiors charred by firing. It is that charred barrel, steeped and aged in Bourbon that makes Scotch spectacular. When the Scotch alcohol first comes out of the pot still it is called, appropriately, “new spirit.” It is perfectly clear, colorless, and has a strong, undisciplined character much closer to “moonshine” than fine liquor. In high school, everyone at that reunion had been “new spirits." We had a sharp, in-your-face character, un-mellowed by any hard lessons or aging, because we hadn’t had any.
But if aging alone would have mellowed us, everyone would be fine with age. But we know that is not the case. And it is not the case with Scotch. If aging alone could do it, there would not be rules about the cask, and the way the liquor is aged. The finest liquor experiences the harshest aging. The hotter the summers and the colder the winters the better the liquor. Temperate conditions create tepid flavor. Stagnation will create a poor Scotch, also. Sitting without any kind of activity takes the character out of the barrel, so the barrel has to be rotated frequently. Sitting and stagnating also create poor human beings. Finally, in Scotch, approximately 10% of the barrel evaporates during aging, and this is known as “The Angel’s Share.” It’s a simple equation; you can’t get a truly exceptional Scotch without experiencing loss. Every single person at that reunion had experienced loss, some more recently than others; every single person had given up “The Angel’s Share” in their life. And it seemed that the ones who had experienced the most loss were themselves the most “refined.” But ultimately, it is fire that makes a tepid, store-brand Scotch into a work of art and makes the “new spirits” into amazing creations.
As the sun came up, it hit me that I had spent the evening with a group of single-malt friends. Not one of us had lived our lives without experiencing pain, loss or grief. Cancer, divorce, the death of friends and family, loss of jobs, financial ruin….nobody I spoke to had gotten through the last 35 years unscathed. We had all experienced the fire. And I realized that it was that fire; the pain, the loss and the recovery that had made these people extraordinary. It turned out that pain and what we learned from it might have been the common bond that we now had.
In June, 1976 in Buffalo Grove, Illinois, several hundred high school seniors graduated and moved out into the world with high hopes for the “good life” and few problems. That same month, in Speyside, Scotland, Glenglassaugh Distillery put up several barrels of “new spirit” into used, distressed, charred oak Bourbon barrels from Tennessee.  This month, 35 years later, a remnant of that high school class met a few miles from the school which helped form them. They had experienced the fire of life, yes, but were stronger and better in most cases. They had mellowed, were more interesting, and their essential “bouquet” was more unique and pleasing than ever.  Also this month, in the Scotland Highlands, the casks put up in 1976 were finally unsealed and poured into cut-crystal decanters, aged and distressed perfectly. The rare 35 year old Scotch went on the market for more than $500 per bottle. If these bottles are as mellow and full of character as the Buffalo Grove class of the same year, Glenglassaugh will be proud. In Scotland, as in Buffalo Grove, the exquisite result of aging and fire is recognized as having unusual value.
In the very near future, I plan to have a single shot of the finest single-malt Scotch my wallet will allow. And I will sip it straight, slowly enjoying its myriad of flavors, and contemplate the things that created those flavors. And I will think of my classmates who have aged so wonderfully, and contemplate the lives and the fires that created their wonderful character. Finally, I will drink to our classes’ ‘Angel’s Share;’ the ones we’ve lost in the process. With any luck, I will be remembering my classmates with that 1976 Glenglassaugh masterpiece, which they have appropriately named;
"The Chosen Few."
Posted by Steve Moore at 1:13 PM