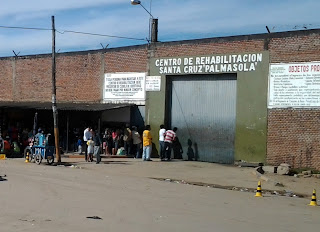 Santa Cruz, Bolivia, April 7, 2012:
Palmasola Prison, Santa Cruz, Bolivia, is a modern-day Dante's Inferno. But instead of  the Roman poet Virgil guiding visitors through this modern-day underworld, my passage  is shepherded by a good man named Jacob.
When one thinks "Bolivian Prison," one might think 'barbarian.' But really, that word is so inadequate in this case.

Palmasola itself is a series of concentric rings of walls and barbed wire. In the center ring is a squalid slum where the prisoners--and their children--live, and into which guards venture only a few times a day when all of the prisoners stand for roll call. (Unless, of course, you are one of the hundreds who have enough money to bribe your way out of appearing for roll call.) In actual fact, the prison is completely run by a mafia of powerful prisoners. They charge the others for their cells, taxes on "imported" items and privileges, and extortion money. Those who cannot afford to pay for a cell sleep in the gutter. Food is a gulag-style gruel served once a day for those who lack the dinero to have their food brought in.  This is my third day with Jacob, an American incarcerated in the hell that is Palmasola, for a crime he did not commit. I would call it purgatory, but the ....
Balance of the article can be found at
http://gmancasefile.com/1/post/2012/04/three-days-in-hell.html
Posted by Steve Moore at 7:18 PM