A Veteran's Day Thank You 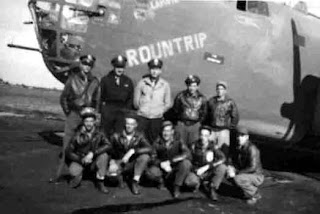 A VETERAN'S DAY THANK YOU.

Michelle's grandpa Richard “Dick” Ketchum, was the pilot of a B-24D in World War II. He was a larger than life (though not tall) gruff Texan rancher and one of my heroes. Knowing him was one of the great experiences of my life. Steve, Jr. found a post on-line from his late co-pilot which included a photo of Dick and his crew just prior to deploying to their temporary base at Benghazi, Libya. Richard is standing, second from the left.

Three months after this photo was taken, (12/1/43, nearly 22 years to the day from the birth of his granddaughter Michelle) over Cologne, Germany, they lost an engine en-route to the target and attempted to continue on their bomb run instead of abort, drop their bombs and return home at high-speed. They were sitting ducks. They and one other aircraft became separated from the protection of the bomb group and were set on by fighters. The other aircraft was shot down with no survivors.

Richard's plane caught fire, but he stayed at the controls until all the survivors got out. The wing then blew off, nearly trapping him in the tumbling aircraft. Crawling out of his seat, he was able to find his parachute (pilots and co-pilots didn’t wear theirs in the air). Amazingly, he succeeded in donning his parachute and bail out through the still-full bomb-bay, escaping less than a minute before the aircraft exploded. He eluded capture until the next day, and spent the balance of the European war in Stalag Luft I on the Baltic. After repatriation, he began training on the B-29 for the upcoming invasion of Japan. The war ended before he completed the training. He remained in the service after the war and commanded a DEW line station in northern Alaska in the 1960’s, flying until the end of his career.

In this photo, Richard is standing, second from the right. His crew flew harrowing missions out of Benghazi and survived only a few missions after returning to England. The link I have to Benghazi and the sacrifice of Americans there is still fresh.

"This photo (taken with my camera) shows our crew at Hardwick in England in early August, 1943, just prior to flying to Benghazi to rejoin our Group after the low level Ploesti mission. We had just acquired a new Navigator and a new airplane which we named ROUNTRIP. Upon arrival at Benghazi, the powers that be, took away our ROUNTRIP and assigned IRON ASS (42-40769) to us." [It was in “Iron Ass” that they were shot down.]