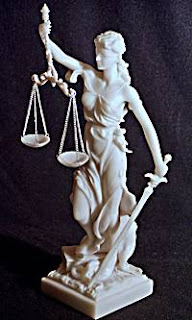 jus tis [juhs-tis]
The quality of being just, impartial and fair.
“Do the accused have a right to be presumed innocent until proven guilty?”
“Do the accused have the right to defend themselves in court?” If you believe they do, then read on. (If you believe they don’t, keep surfing.)
It stands to reason that if a person has a right to a trial, then they have the right to all the appeals and other legal processes allowed under their system of justice.
Meredith Kercher, a beautiful, and by all accounts vivacious, intelligent and special woman was brutally murdered in November of 2007 in Perugia, Italy. Amanda Knox and Raffaele Sollecito were arrested for the crime before the results of any physical evidence examinations were received. This is not my opinion, it is the statement of the police themselves: “We knew she was guilty of murder without physical evidence,” Chief Investigator Edgardo Giobbi embarrassingly admitted on TV, in a scene awkwardly reminiscent of Ashlee Simpson’s lip syncing scandal on Saturday Night Live. Much as Ashlee’s humiliation began when her tech people cued up the wrong song, Giobbi’s began when the evidence finally arrived and showed he had cued up the wrong “murderer.” The DNA of a burglar known to carry a knife (and unknown to Amanda and Raffaele) was found in the victim. But that didn’t stop the embarrassed police/court. They convicted Amanda and Raffaele on what most worldwide observers now consider contrived or even planted evidence. Then they passed the Kool Aid around and everyone drank.
Not surprisingly, both Knox and Sollecito appealed their conviction. Then, something incredible happened. John Kercher, the victim’s father, appeared to decry the fact that Amanda and Raffaele were given an appeal. He used his press contacts to post article after article in the British and Italian press complaining of the burden and the pain the appeals process was having on their family.  To which, I have to ask:
“What’s the point?”
Certainly, a decent, honorable man like John Kercher was not advocating that Amanda and Raffaele don’t or shouldn’t have the right to their legally-guaranteed appeal. So what was his reasoning? Was he simply cathartically emoting in the press? Or was there another reason? The statement was not made when the appeal was announced; the statement by John Kercher was released by the press at the beginning of the appeal, and the timing therefore feels somewhat calculated.
I tread carefully on the thin ice of questioning the statements of bereaved people. I have not endured the pain that has been foisted on the Kerchers and pray to God I will never have to. I respect and admire the dignity with which they have dealt with the tragedy. I pray for them. I ache for them. I do not think they should be criticized. However, this does not mean that their statements are sacrosanct or should not be examined for the sake of justice for Meredith and for Amanda and for Raffaele. Frankly, and I think this point has been largely ignored, if one has to make a choice between; A) Ensuring that all people involved in this case get the full measure of justice to which they are entitled, or B) Protecting the Kerchers from further pain, justice must prevail, as distasteful as it is to think of Meredith's family going through more pain.


Disagreeing with the Kerchers, even publicly, is not disrespect. While much has been written about the Kerchers' "dignified silence" in this case, it should be noted that while they have been dignified, they have not been silent. Especially, they have not been silent at strategic moments, frequently in the weekend prior to important court proceedings. Tomorrow, the final stage of Amanda and Raffaele's appeal begins, and true to form, a statement has been "leaked" to the British press from a member of the Kercher family.
This statement was from a letter written by Stephanie Kercher decrying the deconstruction of the prosecution case. But the letter, curiously, was not written to the prosecutor in the case. It was written (according to the Daily Mail, who got a copy of the letter) to their attorney, Francesco Maresca. Maresca is not simply sitting by and monitoring the case, but is actively cross examining defense witnesses, unusual to say the least. Maresca will also take a share of any of any collectible part of the multi-million Euro settlement awarded to the Kerchers. “Collectible” is the operative word here. Not surprisingly, the letter was “leaked to the press.”
In this letter, Stephanie pleads; “Please don't let Meredith's death be in vain.” But candidly, if Meredith’s own innocent friends are convicted for her murder, her death will not only be in vain, it will become a by-word for injustice. But Meredith’s death does not have to be in vain, it will in some way give greater light to the world in the long run if:

1.     Judicial systems around the world learn from the corruption, the travesties, the ignorance, and the attitudes in this small courtroom in Perugia.

2.     More innocent people are cleared and more guilty are convicted because of this case.

3.     People learn not to pre-judge cases before a trial starts.

Women in painful labor say and do things at which they later marvel, frequently regret, and sometimes laugh at. Anybody who has “coached” a woman through labor knows that extreme pain does not lead to reasoned statements or cautious actions. Care for the Kerchers. Ache for the Kerchers. Pray for the Kerchers. But carefully evaluate what they say—and when they say it. It is our duty, not just to Amanda and Raffaele, but to Meredith.
Posted by Steve Moore at 2:12 PM